In this world of inter-connected devices, it is customary to see smart cameras everywhere; they have become ubiquitous in this modern era. In the past decade, the camera industry has seen a revolution in innovation, technology, and usage, with Gartner projecting that there will be around 15M connected cameras by 2023.

With the evolution of the cameras, attackers have also become more skilled and better equipped. We are seeing many attacks on camera infrastructure where the attackers exploit various loopholes in the system. Recently, there was an attack on a security startup where the attackers breached data of nearly 150,000 cameras and were able to view camera feeds from jails, hospitals, schools, and offices. Earlier this year, cloud-connected cameras of more than 200 individuals were hacked, and the hacker had access to over four years of footage that was backed up online). Some years back, there was an incident where hackers had breached the security cameras of a casino and made millions by gaining an advantage in the high-stake games.

It has become imperative to secure every component in the smart camera ecosystem, as ‘security is as strong as the weakest link.’ Even if a single element in the architecture possesses a vulnerability, it can compromise the whole system.

This blog explains the different attack vectors and security considerations to follow while securing your camera’s ecosystem.

Let us consider the architecture of smart cameras installed in a home. It would have wired or wireless cameras connected to a gateway, which would subsequently connect to the Internet, where it would also accept communication from the developer’s server. A user can access these cameras using their phone’s custom-built app to manage the cameras in two modes – (a) by connecting to the gateway via Wi-Fi, or (b) by connecting over the Internet and getting routed to their camera.

Here is a typical architecture with different components of the smart camera ecosystem. 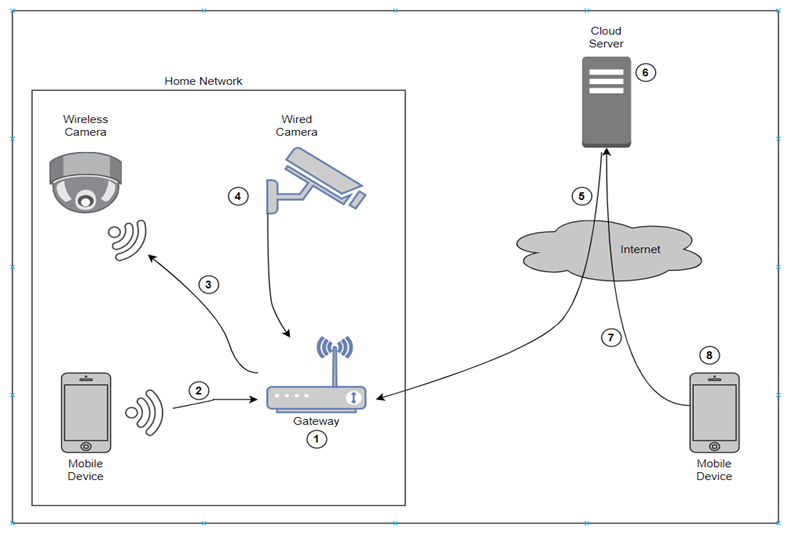 All these components, regardless of whether ownership lies with the user, the camera company, or the public, could possess vulnerabilities. Eight different components are tagged in the architecture diagram indicating points of vulnerability.

As the central controller in this setup, the gateway would be responsible for almost all the configurations, management, access, authorization, maintenance, and update. Hence it becomes significant to secure this component. Also, the attack surface is from both sides – public Internet as well as an internal network. Firmware is exploited in such an attack, and there is continuous research to find ways and means for gateway and router exploitation.

A study of nearly 100 home routers last year revealed that almost all of them had severe unpatched security flaws. Similar is the case with home gateways – varying functionalities but same techniques. The attacker can control all the smart endpoints connected to a particular gateway by attacking routers or gateways.

Ensuring that the firmware undergoes a periodic and ad-hoc security audit by internal and third-party teams is one way to protect yourself from such an attack. Any security issues reported should be fixed on high priority, and the updated firmware needs to be provided to the users at the earliest. It then becomes the users’ responsibility to keep their gateway device updated with the latest version of the firmware.

The main areas you should consider focusing on, from a security perspective, are:

2. Connection from the Mobile device to the gateway

All the internal components present in a typical home would be connected via Wi-Fi signals. This mobile device would be connected to the gateway mainly to manage the cameras. When the mobile device accesses this environment using public internet touchpoints, there would be more authentication mechanisms and security controls – compared to a device connected via local Wi-Fi network. However, it is always better to have the same level of security for the internal network too.

Some of the attack scenarios and security considerations for this case are:

3. The connection between the camera and the gateway

These are the two core nodes in the architecture – and their communication is important as, without this, they serve no purpose. The transmission can be wired or wireless.

Several security considerations need to be taken care of to ensure the overall security of this communication. The most basic is the availability of the network – the protocol should be such that it can handle the DoS attacks – which a hacker can trigger in an authenticated or unauthenticated manner. Next comes the MITM (Man-in-the-middle) attack in which an attacker can sit in between the two nodes and sniff or modify all the traffic – this endangers the confidentiality of the traffic. Enforcing proper encryption can mitigate such attacks.

The camera device is the heart of this ecosystem. Securing the camera’s internal functions and data flow becomes the primary goal to reduce the overall risk, while the next step is to secure the camera’s firmware.

There have been many attacks wherein weak firmware security allowed the attackers to take control of the camera. Earlier, it was not easy to fetch the firmware and analyze it, but recently, several resources have become easily accessible, making this process easy and quick.

The firmware should undergo rigorous auditing to check for any security bugs – in the code, data flow, various logics, and even the configurations. Most of the security issues observed recently are related to authentication – thus, it is mandatory to change the default credentials and remove any hardcoded passwords. It would also provide additional security to enable multi-factor authentication.

5. The connection between Gateway and Cloud server

Typically, this connection would be between the cloud environment of the developer and the home-based gateway device using the public Internet. Since it is traveling through the public network, there is a high probability of attackers lurking to attack the communications. The primary security considerations for this scenario should be:

The cloud server, in this instance, refers to the developer or company-managed server located in the cloud. This server could consist of many machines used for different purposes such as live streaming, video storage, user authentication, firmware upgrade, user configuration, web application, backend programs, logging.

A security team should first audit the cloud environment, and establish boundaries on who will manage the security of which component – the hosting provider or the cloud server owner. The next step is to check for any misconfiguration, followed by checking for efficient access control.

The security considerations are as below:

7. The connection between the Mobile device and the Cloud server

A valid user can manage and access his or her cameras from any point of the world using the Internet. This is made possible via the cloud server, which connects to the gateway to provide exact access to a user’s resources. For the cloud server, it becomes significant to identify and provide the perfect access type to each user. Here are the security considerations and attack scenarios helpful in this case:

The security considerations for mobile applications are also applicable to other platforms used to manage and control the camera. Typically, this would be the application used for various purposes, such as controlling the camera, watching live streams, managing users, recording, and so on.

There can be different attack scenarios in this case:

You should properly audit the mobile application to find any such security or privacy loopholes and mitigate all the risks within a defined timeframe. Since the code resides on the client’s phone, a user can decrypt it to read the actual code – hence it should be obfuscated. This testing should be done in accordance with OWASP Mobile Testing Guide.

Bhumish Gajjar
Bhumish Gajjar works as a Senior Engineer in IOT Security team and holds a Master's degree in Network Security. He has 7+ years of experience across security monitoring, application security, and vulnerability management of various software and tools.
Talk to an Expert 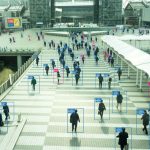 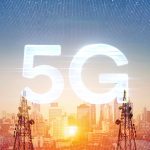